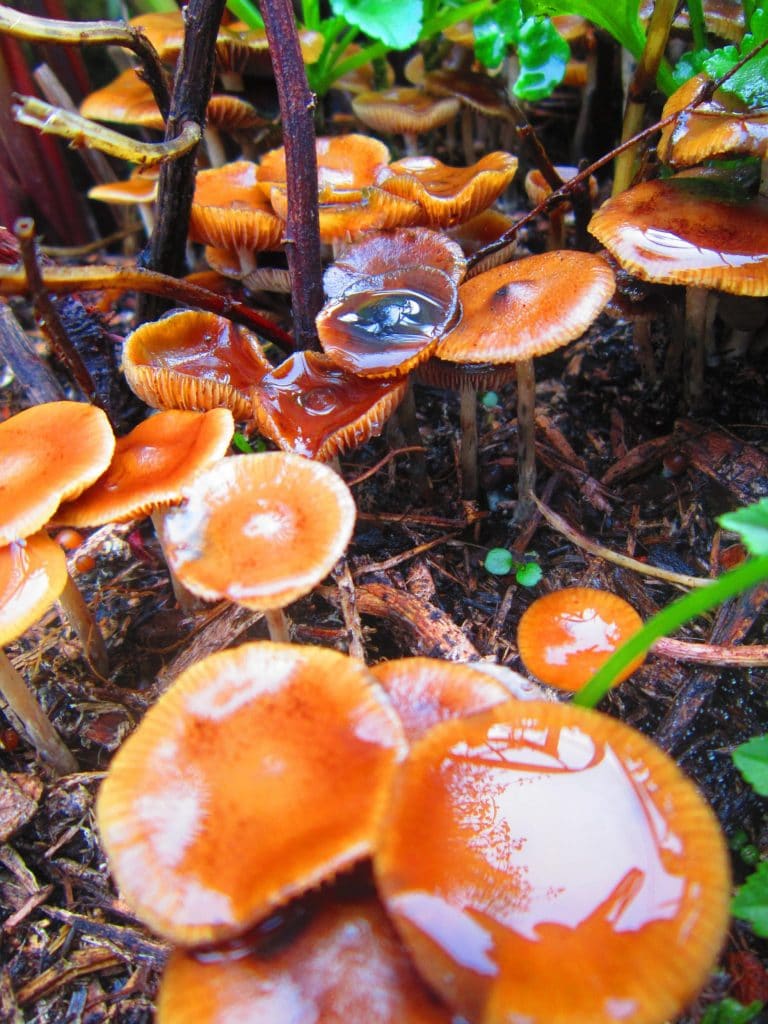 Depression hit hard for me even in my youth. By the time I was in middle school, there was easy access to my mom’s liquor cabinet. Id skip school, blaze her herb and make crazy alcoholic concoctions. Though it was a great mask, this only increased my depression. It was not until I found psychedelics that I started to cultivate more of an awareness of myself. I began to read about all the different plants that were psychoactive in nature. Pairing my research with experimentation. I was mostly fascinated by fungus.

I had purchased 2 manuals to guide me on my search to find “Magic Mushrooms”. The first was a precautionary guide, needed to cross-reference potential “look-alikes”. This book was “National Audubon Society Field Guide to North American Mushrooms“. The second being “Psilocybin Mushrooms of the World: An Identification Guide“. Both absolutley essential to my cause.

As Time went on, I began to travel away from my home state. I wanted to find the best shrooms I could. Psilocybe Cubensis was the most potent closest to my home state of RI. They lived in more tropical climates on the southeast coast. Rhode Island has various strains of Panaeolus Fungi, which are very mildly psychoactive. Florida was my destination. My goal was the Oregon coast.

Upon coming to Florida, I discovered very healthy specimens of Cubensis. I also met fellow shrooomer’s who isolated mycelia, successfully growing their local strain indoors. They taught me Cubensis is the by far simplest psychedelic fungus to grow indoors.

I began to discover more of myself. Working with the fungus opened up a lot of doors for me internally. My depression decreased. I found a new passion for researching. Reaching the end goal of discovery had a great impact on my self-esteem. This was an all-around good thing. Mushroom potency varied species to species. Paul Stamets, the author of the Psilocybin Guide, had a chart displaying potency:

At the very top of the list is Psilocybe Azurescens. This mushroom occurs naturally along a small area of the West Coast of the United States, including in parts of Oregon and California. It has been regularly found as far south as Depoe Bay, Oregon, and as far north as Grays Harbor County, Washington. Its primary locations are clustered around the Columbia River Delta: the first collections were made in Hammond, Oregon, near Astoria.

My goal was to get to Astoria Oregon and find Azurescens. This is the same town “The Goonies“, “Short Circuit“, and “Kindergarten Cop” were filmed. My fascination was not that of a person wanting to see where movies were filmed. I was fascinated by the fungus of the area. There are so many strains of edible, medicinal, and psychedelic fungus. Beyond my concept of abundance. There was a lot to learn.

Astoria Oregon became my sacred holy land. There was a time when I made it a point to return at least once a year. When that became too little I decided I should move there. After leaving Oregon and moving back to California I’ve returned. Just not as frequently. I’ve come to love all types of fungus by taking pilgrimages to this holy land. My stories have inspired others to make the journey as well.

I lived in a commune in Santa Cruz California. Many people would come to visit. One day we all pitched in for a campground. Not far from some of my “honey holes”. We packed 17 people in my van. Then headed north for 2 weeks of outdoor fungus hunting. Equipped with 2 dehydrators and a vacuum sealer. Time was spent gathering, preserving and labeling batches. In between hunting, feasting, and tripping. I highly recommend this experience to any and all humans.

As time went on I began to cultivate my own Psilocybes indoor. They have become an essential medicine to help combat my depression. I highly recommend these mushrooms to anyone combating depression.

Does it really work?

Studies conducted by the Beckley Foundation have found a decrease in depression with participants. They concluded that psilocybin may effectively “reset” the activity of key brain circuits known to play a role in depression.

The classic hallucinogens, which include psilocybin and lysergic acid diethylamide (LSD), are a structurally diverse group of compounds that are 5-HT2A receptor agonists and produce a unique profile of changes in thoughts, perceptions, and emotions. Several unblinded studies took place in the 1960s and 70s. These studies suggest that such compounds might be effective in treating psychological distress in cancer patients. However, these studies did not include the comparison conditions that would be expected of modern psychopharmacology trials.

Two recent double-blind, placebo-controlled studies with psilocybin and LSD examined effects in 12 patients with a life-threatening illness. Including cancer. Both studies showed promising trends toward decreased psychological distress. High-dose psilocybin produced large decreases in clinician and self-rated measures of depressed mood and anxiety. Along with increases in quality of life, life meaning, and optimism. As well as decreases in death anxiety. At a 6-month follow-up, these changes were sustained. About 80% of participants continued to show clinically significant decreases in depression. There were also improvements in attitudes about life, self, mood, relationships, and spirituality to the high-dose experience.

Finding a proper dose is very individualized. Some humans are frightened by the psychedelic experience. In my opinion, a little goes a long way. After explaining I eat Psilocybin every day, most folks respond as if I spend every day tripping. I take a small amount of honey that contains powdered Cubensis, as well as other fungi. This lifts my spirits. It does not get me “high” in the traditional sense. However, I do eat fungus for its psychedelic qualities as well.

A little bit goes a long way. Microdosing involves taking roughly one-tenth of a regular dose. An amount too little to trigger hallucinations. Just enough. I find most humans will key in on their proper dose. As with most psychedelics take your time finding what works best for you.

I want to finalize this by giving my recipe and some insight into the ingredients.

Dry and powderise all mushrooms. Mix all powdered mushrooms in a 1-1-1 ratio. In a jar begin to mix 2 grams of powder per oz of honey. once completely mixed cap that jar, label it, and lick that spoon! That’s it, very simple really.

Psilocybin is great for depression. I include two other mushrooms for their medicinal benefit. Cordyceps has anti-tumor effects. It is great for energy and benefits heart health. Reishi also decreases anxiety and depression. This fungus also boosts the immune system. It has anti-carcinogenic properties as well. The reasoning behind the honey is its ability to preserve fungus. Honey can remain preserved in a completely edible form. When you add in mushrooms, they will last indefinitely.

I just learned so much from this article both about Fungus & Grim Singmuf that is AWESOME!