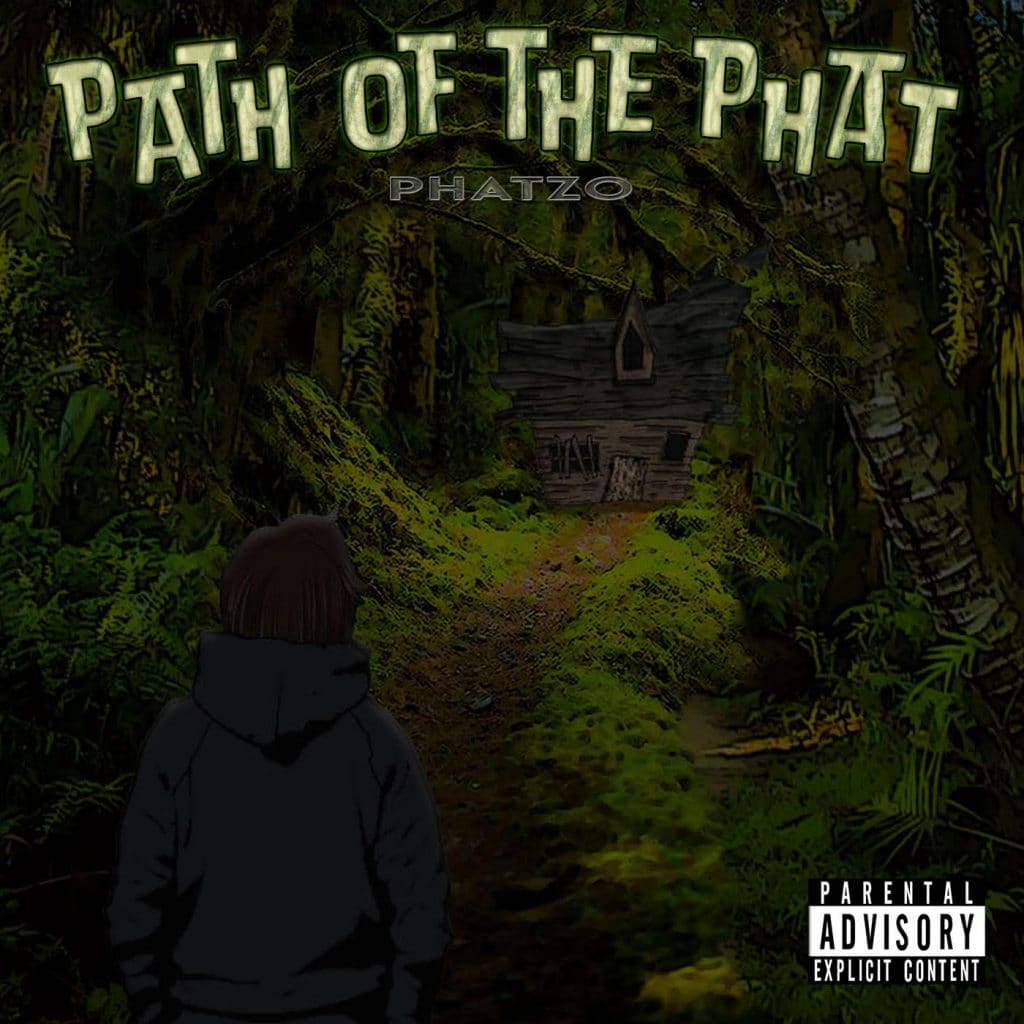 We had the chance to chat and catch up with Phatzo, the rap game’s favorite speedrunner from Hopkins Minnesota, a charity fundraiser, and 5-time Backyard Wrestling 2 World Champion. The newest face of hip-hop with a fresh take. He dropped his first album, Path Of The Phat, after a seven-year grind. Let us take a walk down the “Path of the Phat”…

How did you become involved with Majik Ninja Radio?

I’ve been involved with MNR for almost 10 years now. I joined way back in the day when it still went under the name “TJCN” The Juggalo Community Network. I stumbled upon it when I was looking for Jugggalo Networking websites. Canna was the one who got my equipment setup, and on August 31st, 2010, The Intergalactic Insane Asylum was born.

April 20th, 2011. I was staying with a few friends, and one of them put on some beats. I had been writing music on and off for a few months at this point, but nothing solid. A few scrambled bars, and some encouragement I decided to take a serious shot at it. (Or at least attempt to make one)

Everyone has a story to tell, and I wanted to tell mine. I am a fat kid. I have been since day one. I’ve been bullied, harassed, demeaned, etc. I have never lived the life of a thug, or a drug dealer. (Which at the time, was all my scene consisted of) I felt I could bring something new to the table. It is this ideology that sparked the themes for my scrapped albums Book Of The Phat and T.B.A. True Bold Awakening.

The process is a very random one. It starts looking for a beat and sifting through a lot of bad trap, cover, remix, and chiptune beats. Once I have something I think I can work with. If it’s a beat from YouTube, I’ll type something up on my phone, usually 8 – 16 bars, then forget about it for a few days. If it’s a project I’m seriously working on (A collab, or a track for an album) I’ll stay incredibly focused on that one track. Blocking out my playlist, having that one beat on repeat so I can finish the lyrics. Beats, in this case, will either come from a producer I know, or Annodomini nation.

Can you tell us your success in the gaming world, and how it coincides with your music life?

I haven’t been successful in the traditional sense of “Sitting on Twitch for 12 hours a day playing Fortnite” But in the sense of “Sitting on Twitch for 12 hours speedrunning a game that has been seen in every bargain bin of GoodWill for the past decade” I have played a hand in raising thousands of dollars for Carbon Fund, and Able Gamers, through the MidWestSpeedFest community. They put on multiple events per year, and I have done runs across all of their live events in 2019.

I have been able to connect with some artists who are speedrunners, and even had my single “Speedrunning” featured during MidWestSpeedFest 2019 and MidWinterSpeedSprinter 2020. At MWSS 2020, I gathered footage for a music video for that same single, using members of the MWSF community. This event raised $4,500 for the Carbon Fund Organization, our biggest amount raised from one event to date.

Do you cipher with other gamers?

While I’ve been able to find a few gamers that can rap, or can make beats. 95% of gamers (at least in my circle) are just casual rap listeners. Though a lot of them love my album Path Of The Phat (even sold a few copies during MWSF ’19) The plan at MidWinterSpeedSprinter 2020/VGM Con 2020, is an attempt to find some artists and get one going. 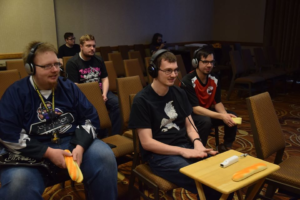 Muck Sticky. My go-to artist when I need to relax.

My aunt has published a book, my mother and sister have written several short stories. As a kid, I was in a lot of Extracurricular music programs. I took 3 years of piano practice, 8 years of choir, and another 4 years of the band (I played the clarinet) So yeah, a lot of authors, no musicians, I’m technically the first.

The history that I’ve built for my music, the songs that have yet to be (properly) released, The people that have said “You can’t/shouldn’t do it. You’re wasting your time” The novel’s length of excuses and ‘reasons’ why I will flop, and my content lost to time. All of my detractors, yet still my album is available on all major platforms. The drive to push forward, past the negativity and say “Screw you, you’re wrong, I’m right” to everyone who ever doubted me.

Creativity. Perfect execution is important but can force you to rush a project/track/collab, while letting it naturally come to you, thus producing a better product.

Speedrunning. It was the song that re-sparked my love of writing music and is my favorite song out of everything. (It’s also the song that most people in the MWSF community associate me with)

When I first began, I recorded using an $8 mic, taped to a $2 butter dish, on top of a mug near a computer with free audio recording software that would, 99% of the time desync the beat/vocals. I used to rap about the problems of the world, using tagged beats stolen from YouTube and shadowville, no mixing, no third verse, and everything in one take. If you’ve ever wondered why I call my studio the “Half-Assed” studio, this is why. Now I have a halfway decent condenser mic on a stand surrounded with soundproofing foam. Using legally purchased beats from Annodomini Nation & other producers, with a copy of Adobe Audition. As of right now, rapping about the path I walked as an artist, the struggles I’ve gone through. With Mixing/Mastering breaks in-between verses, an additional verse.

Getting used to doing live performances. Doing shows, and performing (outside of marathons) is something I’m still not used to (despite doing a few of them in the last 2 years) Lyrically, going more in-depth with my words, and using less one-syllable words, is something I’m trying to challenge myself with, for the next album.

What puts you in rhyme mode?

Headphones, a can of green tea Arizona, and determination.

I have collaborated with a few artists, Canna CDK, Mr.Nobody, and Grim Singmuf are the first ones that come to mind. I get it in my head that “This is for another artist, this is for one of their projects. Park any/all current music. THIS is your priority right now” Any spare time not required for streaming/my job, will be spent towards getting the collab project done.

2013 – 2014, that year was the roughest for me, both in my personal life and in my music. I had effectively stopped writing music and was trying to fight off being homeless. I bounced from shelter to shelter, trying to find my way back home to Minnesota. I wrote here and there, but nothing too solid that I remembered/would want to record. That year was the hardest obstacle I have had to overcome. But through that, I gained a lot of friends and a newfound love of Speedrunning.

Watch Backyard Wrestling 2: There Goes the Neighborhood – Western Title in 1:21:16 by DJ Phatzo at Midwinter Speedsprinter 2020 from MidwestSpeedfest on www.twitch.tv

Can you explain speedrunning?

Ah yes, speedrunning. The thing I keep mentioning throughout this piece. Speedrunning is the art of taking a game and trying to beat it as fast as possible. Every game has its own unique set of rules and categories. Some of the most common ones are:

Currently, I hold Nine World Records. Four of them are for Backyard Wrestling 2 – There Goes The Neighborhood.

At the time of typing this, MidWinterSpeedSprinter has just concluded. My run was a live World Record. So my next project is assisting with MWSF’s next marathon “MidSpringSpeedFling” which will be raising money for the OI Foundation May 1st – 3rd. In Music, I’m working on Crits & Collab, Tires To Tracks, and a music video for Speedrunning.

It would have to be teaming up with Canna during the TJCN days in 2010. Without him, I wouldn’t have become a DJ or been remotely interested in writing music, and DEFINITELY wouldn’t have released an album.

Wake up, Go to work for 8 – 13 hours (Customer Service Management, you gotta love it!) Come home, browse for YouTube background noise, Get the itch to be creative? browse for some beats. Then crash, just to do it all over again the next day.

Ideally, how would your gaming life and music life combine in the most successful way?

Ideally, I would like to be successful enough to where I could have a product that has a sound that appeals towards speedrunners, with lyrical content that die-hard fans of Hip-Hop. My goal is to someday run at Games Done Quick, the biggest Speedrunning event of everything (Think of it as the Wrestlemania of speedruns)

What are your non-musical goals, Phatzo?

Right now I am teaching myself console repairs and mods. You would be surprised just how easy/weird some consoles are to modify. A Nintendo Wii, for instance, takes all of five minutes, is insanely easy to do, and is the perfect emulation device. A 3ds requires a few files on a flash cart and a MAGNET to jailbreak. The hardest one (at least in my collection) so far has to be the Xbox 360, which is the only one I have that utilizes a modchip. So on top of modding/repairs, I am also learning to use a soldering iron.

Wish to continue along the Path of the Phat?

I look forward to watching you develop as an artist!