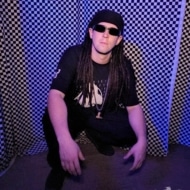 Artist | Audio Engineer | Director
Founder and owner of Earworm Entertainment. As for the rest, I try to let my music speak for itself.

Follow
Big DMK
Big DMK is a rapper from Worcester Massachusetts. He has released albums as a part of multiple different rap groups, including Worm City Syndicate, NFG

Follow
Jay Prophet
Coming out of the woods of exeter R.I. Justin Gould steps out of the DJ project and enters a world of Horror Hip Hop

Follow
Maniak Max
1/3 of NFG (No Fucks Given), the one and only, Maniak Max. Coming straight outta MA giving you that white trash, raw, gritty, G- shit

Follow
Grim Singmuf
Grim Singmuf maintains a strong community involvement as he collaborates with other like-minded artists, creating their unique brand of psychedelic Hip-Hop. The best of Grim

This website uses cookies to improve your experience while you navigate through the website. Out of these, the cookies that are categorized as necessary are stored on your browser as they are essential for the working of basic functionalities of the website. We also use third-party cookies that help us analyze and understand how you use this website. These cookies will be stored in your browser only with your consent. You also have the option to opt-out of these cookies. But opting out of some of these cookies may affect your browsing experience.
Necessary Always Enabled
Necessary cookies are absolutely essential for the website to function properly. This category only includes cookies that ensures basic functionalities and security features of the website. These cookies do not store any personal information.
Non-necessary
Any cookies that may not be particularly necessary for the website to function and is used specifically to collect user personal data via analytics, ads, other embedded contents are termed as non-necessary cookies. It is mandatory to procure user consent prior to running these cookies on your website.
SAVE & ACCEPT
0:00
0:00